Tacos, taquitos and more about how to make tacos Mexican Style

Ann Hazard
5
1 Review
Was this recipe helpful to you? 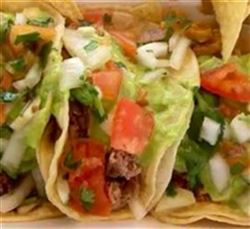 How to Make Tacos the real way

The Cheater Way and the Purist's Way

You can cheat on this one and use canned white meat chicken just as you did with the beef tacos, or you can bake the chicken breasts. The cheater way will take you about 10 minutes, while the purist's way will take about 40. You'll have enough chicken filling to make 12super yummy tacos.

Purists: Bake chicken breasts in oven for 30 minutes at 350 degrees. Remove from oven and cool. Using two forks, shred the chicken. In a medium sized bowl, mix shredded chicken with salsa and garlic. Add salt and pepper to taste.

Cheaters: If you're using canned chicken, drain off excess liquid, place in bowl and shred. In a medium sized bowl, mix shredded chicken with salsa and garlic. Add salt and pepper to taste.

Hint: I prefer these with fried tortillas.

This filling is lean and light, yet delicious. Thanks to the cumin you'll never taste anything that compares to this turkey filling. It's delectable! It takes about 40 minutes and makes enough filling to make 12 tacos. Hint: This is also a great way to use up leftover turkey after Thanksgiving and Christmas!

Hint: These are best served with fried tortillas.

This Baja original has been around longer than I have. According to local legend, fish tacos originated in San Felipe (well, the folks in Ensenada claim it was invented there too-but no one really knows for sure!) where they have always been the street taco of choice. In the early '80s, they were discovered by a young Baja aficionado who begged the recipe off a street taco vendor and brought it northwest to San Diego. He opened a tiny taco shop named Rubio's down by Mission Bay that specialized in authentic Baja-style fish tacos. By the year 2000 there were over 100 Rubio's restaurants in Southern California and Nevada-so I guess I don't really need to tell you that the popularity of those fish tacos has skyrocketed.

For the best fish tacos south of the border these days, you have to travel to San Felipe (on the Sea of Cortez) or Ensenada (directly to the west on the Pacific). My favorite tacos can be found at the fish market in Ensenada, right on the waterfront. When you first drive into town, you'll make a aright turn just past the ship repair yards and immediately you'll see the outdoor fish market. There's a huge palapa on the right, at dockside, where vendors sell an incredible array of just-caught seafood, fresh shrimp cocktails and the most awesome fish tacos around.

This recipe does its best to bring Baja Fish Tacos to you. The recipe makes enough for a dozen tacos. Depending on their appetites, this will serve three to four people. But then again-if your friends are anything like mine-they may be so enamored with your fish tacos that you'll have to double the recipe next time around.

HINT: Oh, and if you don't want to use fried fish, you can lightly season and broil or grill the fish filets instead. You won't sacrifice either the taste or the inherent air of festivity generated by these colorful, incredible tacos. Recipe takes about 20 minutes.

Dredge each fish filet in beaten egg. Coat thoroughly with mixture of corn flake crumbs and Italian bread crumbs. In a frying pan, heat oil until a drop of water sizzles when put in the pan.

Cook each fish filet for three to four minutes on each side. Remove from pan and drain on paper towels. Place filets in oven on warm until you are ready to serve.

In a small bowl, mix the sour cream sauce and Pico Pica with the radishes. Put a fish filet on one half of a hot corn tortilla. Place one to two tablespoons of sauce on top of filet as you are serving it. Garnish with shredded cabbage and serve immediately with salsa fresca on the side.

The first time I ever heard of lobster tacos was at Mama Diaz' restaurant in Bahía de Los Angeles. (Bay of L.A., as we gringos call it, is a remote but spectacularly scenic fishing village on the Sea of Cortez, a third of the way down the Baja peninsula.) That trip was about thirty years ago, before there was even a paved road south of El Rosario (barely the other side of Ensenada).

We flew in with Francisco (Pancho) Muñoz, a World War II ace who ran Baja Airlines and was a great buddy of both my Pappy and Erle Stanley Gardner (the creator of the Perry Mason series AND the author of several books on Baja). Pancho's leaflets advertised the Bay of L.A. as, " ... the Fabulous Fishing Resort in Baja." A flight left Tijuana every Friday morning at 11:00 and returned every Saturday at 2:00 pm. Round trip tickets went for $47.52. Flying time was a little over two hours in one of his two Douglas B-18's (World War II bombers similar to DC-3's). After we'd traveled with Muñoz a few times, he and my dad (who are both in their late 70s now!) became great amigos in their own right. Often, over the years, when we flew with him, one of my folks would sit up in the cockpit and hang out with him. Sometimes my sister Nina and I got to also, but our favorite jobs were when we got to serve canned drinks, sack lunches and other snacks to the passengers-which to two girls under 12 was-in today's gringo lingo-way cool.

I still think of Pancho Muñoz whenever I pass the airport in Ensenada and see a pair of old, dilapidated Douglas B-18's sitting beside the runway there, just rusting away. Every single time I fantasize that those are his planes, the same planes I flew all over Baja in when I was a kid.

A few years ago I went back to the Bay of L.A. Sure enough, the Casa Diaz was still there, even though Mama and Antero had both passed away. And sure enough, they still served lobster tacos, even though they weren't on the menu. Some things don't ever change and one of those facts of life is that the best things in Mexico are not always on the menu! Especially in the obscure, off-the-beaten track kind of places. I like that. Lobster tacos are best served as soft tacos in fresh corn tortillas. Once you cook the lobster meat, these only take a couple of minutes to make enough filling for 12 tacos.

Heat all ingredients in medium sized saucepan. Serve as you would any tacos with a variety of condiments.

These days, in Mexico and in California, Shrimp Tacos are a favorite item on any menu. The shrimp here is spicy and lightly sautéed in butter, garlic, chiles and lime juice. Regarding the heat of those chiles-actually, you can make the shrima as hot or mild as you like, depending on how many chiles you use. If you hate it hot, leave the chiles out. If you like it medium-hot, be sure to remove all seeds from the chiles-that's where the heat is. If you like your food really hot and spicy-then leave those seeds in!

This recipe is for soft tacos, which are not fried. Shrimp tacos are best served with fresh corn tortillas and a variety of condiments and salsas. You can have this meal ready in a half hour. Heat up a can of refried beans to go with it, make a quick salad and Voila! You're happening! Makes 12 tacos, enough for four to six people-depending on how hungry they are.

Heat all ingredients in medium sized saucepan. Heat tortillas in the oven or microwave until hot and pliable. Fold and fill in the same way as you would fried tacos. If your tacos seem inclined to fall apart, try using two tortillas for double the strength. Serve immediately, with a variety of condiments. Yum! Yum!

How to Make Tacos the real way