Patricia Quintana
Rate and Review this Item
Was this recipe helpful to you? 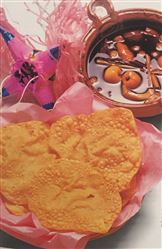 These fritters are the most authentic Mexican dessert that are especially popular in Posadas.

Dissolve yeast in milk. Place flour, salt, egg yolks, egg whites and yeast mixture in a medium bowl. In a separate bowl, mix together the sugar, butter, anise seed and lard. Add flour mixture and knead dough with hands, adding a little boiling water. Continue kneading dough on a floured pastry board until elastic and not sticky. It may be necessary to add up to 1 cup more of flour to obtain desired consistency. Form a ball and coat it with a little oil. cover and set dough aside until it doubles in volume.

Heat oil and lard or vegetable shortening in a large skillet or deep fryer. Meanwhile, turn a round bottomed cazuela upside sown. Cover the bottom of the cazuela with a dishcloth. Sprinkle cloth with flour. Pinch off about 1 1/2 inch ball of batter and roll out on a floured surface until it extends to about 3-4 inches in diameter. Place on cazuela and carefully pull on edges, working around the circle stretches to roughly 9 inches in diameter. The dough should be stretched very thin, almost transparent. Place fritter in oil and fry, basting it constantly with oil. Turn it two or three times until its evenly light brown. Then remove fritter from oil and drain on paper towels. Repeat the same procedure for the remaining batter. Traditional fritters are round and thin, but you may prepare them in rectangles using a pasta machine if you prefer. Heat the sugar with enough water to cover. Add the cinnamon and fruit. Cook over high heat for about 45 minutes or until syrup is thick.

These fritters are the most authentic Mexican dessert that are especially popular in Posadas.