MexGrocer
5
2 Reviews
Was this recipe helpful to you? 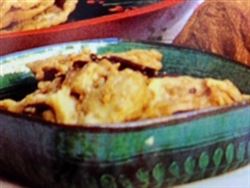 In large mixing bowl, place the pieces of bread. Melt 4 tablespoons of butter and mix with 2 tablespoons of canola oil. Drizzle butter mixture over the bread, tossing to mix thoroughly. Place bread pieces on cookie sheet, and place under broiler until toasted lightly brown, turning as needed. Remove from broiler and set aside. In a saucepan, combine the water, brown sugar, and cinnamon stick. Bring to boil, letting boil for about 5 minutes until caramel in color and of a syrupy consistency. Remove from heat and set aside.

Whisk together the remaining oil and butter, with the brown sugar syrup. Drizzle over the bread. Place in preheated oven and bake for about 30 minutes. Remove from oven.

In mixing bowl, beat the egg yolks until thick and lemon-colored. Gradually beat in the milk and vanilla. Pour over the baked bread, and return to oven for 40 minutes until the top of the custard is golden-brown. Serve while still warm. You can whip the whipping cream and use that as a topping for the bread pudding (optional).