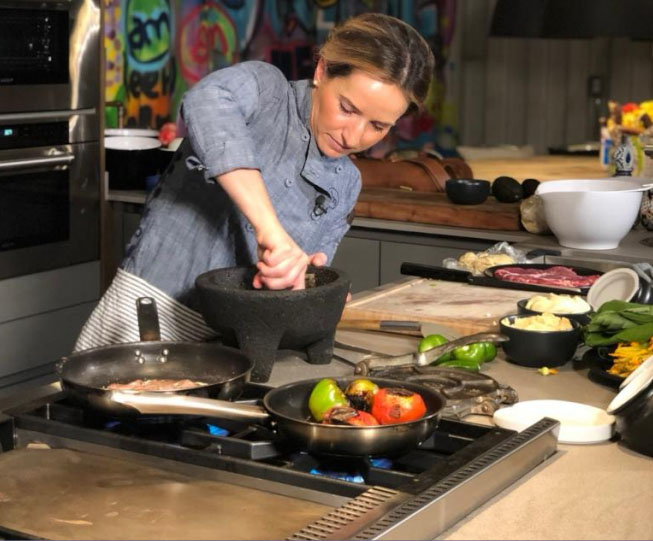 "My main goal is to achieve making unique culinary creations, which reflect many of the diverse gastronomic traditions that belong to the different regions of the world, highlighted by my personal Mexican touch. All of this under a modern perspective to be able to accomplish authentic and original results that come to delight all of our senses and put up with the demands of all palates."

Learn how to cook Mexican food, it is simple. Ancient Mexican cooking techniques are what will give your dishes the ultimate Mexican taste.

We're totally convinced that you will love our LIVE online Mexican cooking classes with Chef Ana Martorell, that we will give you a BEHIND THE SCENES look of our recording of our first and FREE CLASS. We will show you how to make an "Infladita" which means "Puffed Tortilla" which is ideal to plate beautiful Mexican cuisine dishes with chicken in mole, cochinita pibil, and many more delicious meals. Watch it now!

MEXICAN NOT SO NACHOS

Ignacio "Nacho" Anaya was the creator of this dish in Coahuila, corn chips, melted cheese, jalapeño peppers… Made with puffed fried tortillas, this worldwide known dish will reveal to you many of the flavors of Mexico. It is the best example of how creativity and simplicity can make a certain something that people love.

All the way from the Pacific coast of Acapulco, this dish originated on the port of Barra Vieja’s beach shows the amazing relationship that exists between the products of the sea, Mexican spices and the charred flavor given by a charcoal grill.

The creation of this famous cake is disputed between experts to finally learn if it is Mexican in its roots or an authentic Nicaraguan dish. What we know for sure is that it is a favorite between Mexicans. You just need a fluffy sponge cake, a great mix of milk flavored with a Mexican vanilla blend and a creamy airy texture.

Pibil is a traditional Mexican marinade, usually made in Yucatán, one of the cribs of Mexican gastronomy. The achiote red paste makes this dish unique, it is usually used to cook certain meats like pork underground. Now, it is time to reinvent it by using it on seared Tuna, a fish that lives on plenty Mexican coasts.

Lets recreate the typical “tacos Rosarito”. Accompanied with a white fish patty coated in chipotle-mayo sauce, this hamburger is a different way to taste the flavors of Ensenada’s port in Baja California, Mexico.

My version of the molten lava cake cooked in a pure clay flower pot, with a unique touch thanks to a well-known dish that shows how mexican and spanish cultures were brought together, Mole.

From the coast of Veracruz, by the Gulf of Mexico, this rich crab spicy soup shows the versatility and uniqueness that Mexican ingredients may give to any preparation. First originated from a French dish “Soupe aux fruits de mer”, this Mexican adaptation will blow your mind.

Mole speaks of Mexico. This dish is an homage to the delicious Mexican mole Enchiladas made in a fine dining style. Usually cooked with black or Poblano mole, it represents one of the most eaten Mexican plates within Mexico.

Corn may be used in salty or sweet dishes. This way of cooking corn tortilla dough is not only fun but an authentic Mexican experience that you cannot miss. The technique for making puffed tortillas, better known as “infladitas” varies on the region where it is made.

This dish is a heritage from the Mexican indigenous that inhabited the city of Tlaxcala a long time ago. Also known as the “Aztec soup”, Tor tilla soup was born directly on the area called “the maze land”. Some fried tortilla, tomato stock and ancho chili peppers are some of the ingredients that compose this authentic Mexican plate.

My signature sauce “ Tatemada” makes this fried tortilla “infladita” a unique option to taste Mexican gastronomy. The sweet but spicy flavors of this pork chicharrón filled tortilla, make this plate a Mexican must!

In Mexico City, tamales are traditionally wrapped in corn leaves, and in places like Oaxaca, they’re usually wrapped in banana leaves. These tamales are made in a different way to maintain their round and fluffy shape. Check it out!

“ Tlayuda” is a tortilla which is molded into a plate shape with the intention that it can hold several ingredients on it. This dish is served in almost every restaurant and market stall around Oaxaca.

This particular dish unites a famous Italian cooking technique with a very famous Mexican preparation to create a unique dish. Accompanied with fried plantains and charred tortilla, this risotto will share the ultimate Mexican flavor.

Yucatán is one of the most famous Mexican states for its cuisine. This dessert is the Mexican version of French toast, flavored with a Maya Mexican vanilla blend and hibiscus, better known in Mexico as “flor de Jamaica”.

Contrary to popular belief, Caesar salad was first made in México. This grilled version of the salad pretends to bring out all of the flavors in each ingredient to make of this dish a new and intense experience.

Fried cut short wheat noodles cooked in a typical mexican tomato and chipotle purée, coated with a thick fried bean cream sauce that, with its aroma, will make you travel directly to Tlayacapan, which means “Nose of the soil” in Náhuatl, language of the Mexican ancient gods.

Tamales can be eaten at any hour, for breakfast, lunch or dinner. Pink sweet tamales, used to be colored with mealybugs, know in Mexico as “grana cochinilla”, but nowadays food coloring is used since it has a more standardized result in color tones ...